The EnergyTube is a modular system providing the highest level of safety, as well as reliability that currently can be achieved in an energy storage system (ESS). At the moment, an ESS

consisting between 1 up to 120 EnergyTubes is feasible, i.e. leading to an accumulated stored energy between 100 Wh and 12 kWh. The number of EnergyTubes can be adjusted dependant on the energy producer or the energy consumer. It is intended to realize systems, with a clearly higher number of EnergyTubes however, in the meantime, higher capacity can be realized by increasing the number of ESS.  The advantage of the EnergyTube system lies in the feature that it interchangeable can be connected directly to varying applications, preconditioned that they are having a rated voltage of 48 V d.c. and 36 V d.c. respectively. Thus, the EnergyTubes cannot only be used in various application as a mobile storage system, but also provides an energy storage system for PV systems, windmills or water power plants. 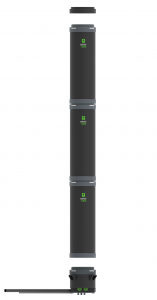 The EnergyTube can be described as follows:

Some of the applications of EnergyTube can be discover here: https://www.youtube.com/watch?v=A2Np–1ykDs

Working in partnership with European Institute for Innovation(EIfI).